It took me long enough but I’m FINALLY going to be sharing about my “recent” but not-so recent anymore trip to Washington state.

I recently resigned from my job in Colorado, check out this post if you wanna know more about that. I knew this resignation meant I had to move back home so I wanted one last West Coast adventure (for now anyways.)

Washington has been on my bucket list since I was little and I saw a mesmerizing photo of tulip fields in a National Geographic magazine. I recently tried to do some research and find which edition I was remembering and I can’t find it. However, looking back it was probably a photo of tulip fields in the Netherlands. While I haven’t been able to visit the Netherlands yet, I went to the next best thing: the Skagit Valley Tulip Festival in Washington!

This trip was super spontaneous. I intended to take the trip after moving home to decompress and reflect but after a little research I realized that I needed to see the tulips in April to really see them in all their glory. So, I quickly found a flight, an AirBNB and I was headed to the airport the SAME day I handed my keys over to my boss and said goodbye.

I think it ended up being helpful to have the distraction. Quitting my job was one of the biggest life changing decisions I’ve made thus far. I think if I had to just sit at home by myself after making such a big decision I would have had a couple of panic attacks and possibly a nervous breakdown.

The tulips are north of Seattle so I knew I would have to fly into Seattle and then rent a car to get up there so I decided to spend at least a day in the city. So, I had one night in a hotel before checking into my AirBNB near the tulips.

I got to Seattle around 9pm on a Friday and had pre-paid for a shuttle to my hotel. While I saved a good amount of money doing this rather than an Uber/Lyft, I definitely missed the convenience of calling a personal taxi. I had to wait around 40 minutes for the shuttle and then another 30 as they dropped other passengers off at their hotels on the way to mine.

I loved my hotel, The Graduate. I decided on a hotel after realizing that most AirBNBs only had check in up until 10pm and I was nervous I would be later than that. I’m super glad I went with this quirky and cute hotel and would absolutely stay there again. My room was pretty small but that didn’t bother me as I was only staying there two nights. 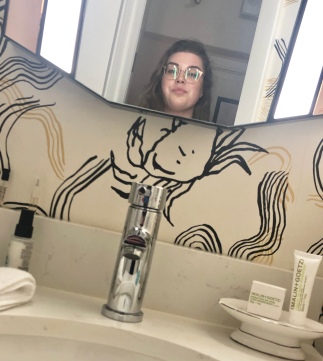 The carpet in the hallways

For it being a last minute trip, I did a pretty decent job planning and fitting in as much as I could in one day (not to pat myself on the back…but yeah, I did good.)

Immediately, Friday morning I ran into a speed bump in keeping with my itinerary. There was a lot of construction going on around my hotel resulting in several roads being closed and I couldn’t find the little cafe I had decided to go to for breakfast. I ended up giving up and getting a quick coffee and muffin at a Starbucks. I also passed the university visitor center on the way to Starbucks and, of course, it was closed. Well, another thing off my itinerary lol.

My original plan was to walk to the Japanese Gardens but I noticed there was a transit station near the stadium that I happened to walk by. I knew from researching their transportation system that I could pick up an Orca card here and I needed that to use the buses. So, I decided to go ahead and pay for my Orca card and try out a bus to get to the gardens.  I paid for the regional day pass which was $8 and covered unlimited fares for an entire day as long as the fare wasn’t over $3.50 (most fares were under this price). There may have been a cheaper option but I liked not having to worry about loading money on and having unlimited bus rides at my disposal. I only used bus routes on this trip but Seattle also has a light rail. I used Google Maps to figure out what bus to take and where to get off. It was by far the easiest time I’ve ever had with public transportation.

The Japanese gardens were beautiful but looking back I would opt to do something else as it was a small garden and I had to pay $8 to get in. However, it was a peaceful place to sit and think and take a deep breath.

After the gardens, I walked to the bus station and I was on my way to Pike Place. This was another place I had been wanting to visit for a long time and I really enjoyed walking around the market and getting a sneak peak at some tulips. I also found a sweet little book store where the owner serenaded his customers with opera and even shared a duet with a lady who was shopping. 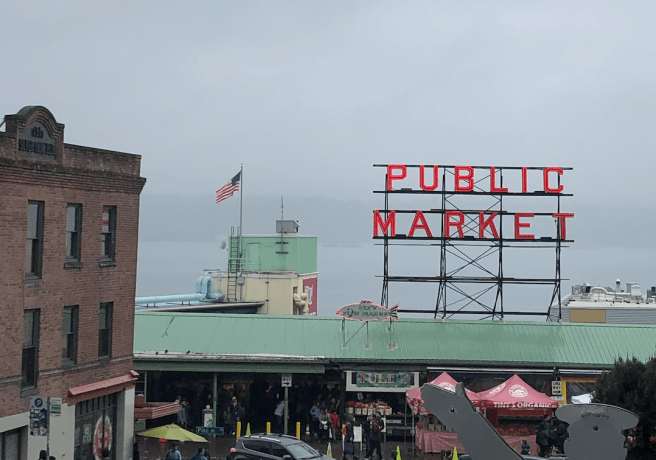 I ate at the Athenian, fully intending to place my veganism (I know, I’m sorry) on hold to have some seafood, and had one of the best solo dinners I have ever had. I knew there were tables with views of the water but I was certain I wouldn’t get anywhere near a window. The place was packed and I was sure I would get put at the bar since I was alone and I was perfectly fine with that. However, the host took me to a two person booth right next to a huge window over looking the bay. There was no logical reason I would have been given such a prime table but for some reason I got it and I think I smiled the entire meal.

I ordered a local cider and clam chowder and it was so delicious that I am sitting here thinking about when I can go back to have some real chowder again. 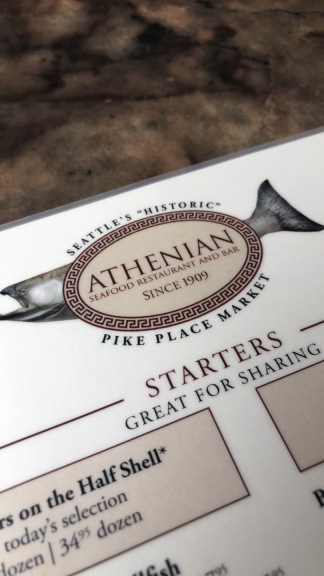 I’ve eaten out alone before and I’ve always struggled with the experience. I usually feel awkward and gawked at but I didn’t this time. I throughly enjoyed my meal and even if people were staring I was unbothered. It felt like a real moment of growth and peace for me. Who knew that would happen while shoveling clam chowder down my throat?

Next on my schedule was the ferry and on the way down to the waterfront I accidentally happened upon the infamous gum wall and added a bit of my dna to the colorfully coated walls. (Admittedly, I didn’t really find this gross. I think it’s cool but all my friends and family vehemently disagreed with me.)

I desperately tried and failed to figure out the ferry schedule. I did purchase a ferry ticket but it ended up being the wrong ticket and that ferry wouldn’t be leaving for several more hours. So I gave up and just headed towards the Space Needle and the Chihuly museum.

I had pre-purchased bundled tickets for both the Space Needle and the Chihuly Garden and Glass exhibit. I really recommend doing this as you save some money and it you wouldn’t want to miss either of these experiences. I was early for my ticket time though so I chilled in the Seattle Center, had a coffee and a snack and read a little until it was time.

A universal travel rule of mine is to get a bird’s eye view if possible. So, the Space Needle was something I knew I couldn’t miss. They also had a bar at the top and I sat and had a can of wine while I enjoyed the view and caught up in my travel journal.

The Chihuly exhibit was the most colorful and happy place I have ever been. Highly recommend! 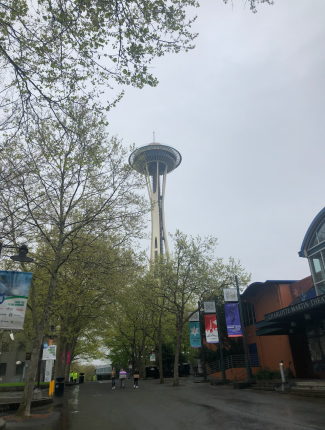 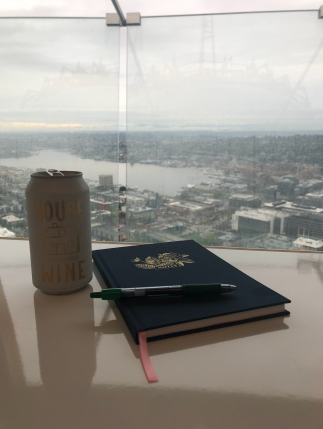 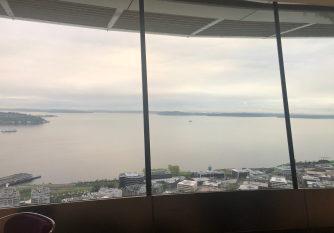 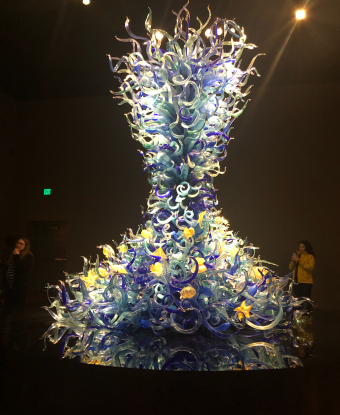 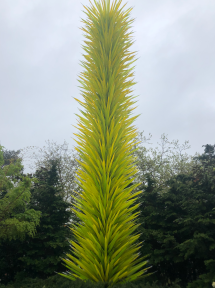 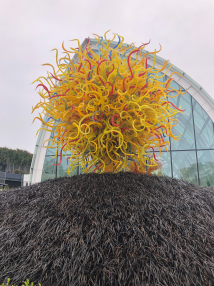 After these, I started walking to local sushi place for dinner and then to the AmazonGo store. I did no research into the AmazonGo store but luckily the staff there was friendly and used to clueless tourists and they helped me download the AmazonGo app and link my account. Once you do that, it’s smooth sailing. I picked up some snacks for the road trip the next day and literally just walked out of the store. Even though I knew this was how it worked, I was still paranoid I had stolen as the charge didn’t show up on my account until a few days later. The future is weird, huh?

I had intended to visit the first Starbucks but it was getting super late and my feet were killing me so I decided to skip that one after some feedback that people often didn’t think it was worth it.

I caught a bus (a double decker!) back to my hotel and collapsed after a long but wonderful day. I also called and made sure it was okay if I picked up my rental car late lol.

This post was getting a bit long so we’ll make this one about Seattle. There will be a part two about the tulip festival!

Thank you so much for reading ❤

View all posts by lovelydysfunction